Welcome to the second part of our solar series. While the principle of solar power seems friendly to our environment, there are quite a few drawbacks which need to be taken into consideration. They include (but are not limited to) land, water and hazardous materials use, their improper location as well as the impact of solar power generation on the electricity networks. Adding the drawbacks together darkens the carbon-free picture of solar.

How to make friends at a Greenpeace rally

It takes lots of space
Last week we saw that currently, humanity needed around 3,200GW of power and that the yield of solar panels was currently around 100W per square meters.It implie that using solar power only would require 3,200 billion square meters of solar panels. This is equivalent to the land area of India.
Solar panels cannot be installed anywhere and have an uncanny habit of being set up near population centres and on/near arable land. There is currently around 16 million square kilometers of cultivated land. If solar panels were to take some of this space, this would reduce arable land size by 20%. Unlike wind farms, solar and agriculture struggle to cohabit. With a global population still rising, the question of the priority of solar panels over food crops will be acute in the coming years. 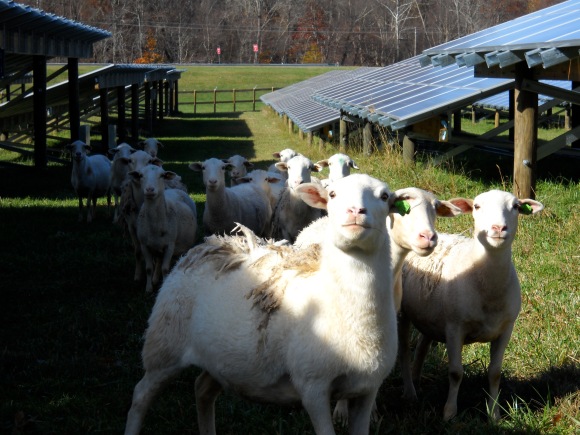 Water and hazardous materials use
Manufacturing solar panels is very resource intensive as we saw quickly last week. The most demanding phase is the two phases of purification of silica into polysilicon, representing ⅔ of the energy needed to manufacture a solar panel system (even Greenpeace says it).
Purifying silicon produces many by-product chemicals including the highly explosive and irritant silicon tetrachloride. The level of contamination deemed dangerous is 2 parts per million (there are 400ppm of Co2 in the air your breath for instance) and you can smell silicon tetrachloride when its concentration in the air is 1 to 5 ppm. In sum, once you smell it, you are in serious danger. This is only one step of the manufacturing process and the other steps also bring their lot of energy use and recycling challenges. So if producing a solar panel is requiring a lot of resources, at least once it is operating, it is payback time, right?

Location Location Location
Sadly, as with real estate, location matters, more precisely it is better to put panels where it is sunny. You will smile at this obvious statement but as solar and renewable energy in general have become political issues, they have benefited from profligate national energy policies. Germany, one of the least sunny country globally has the largest installed capacity of solar panels globally (before probably being overtaken this year by China). A solar panel in Berlin in January receives on average nearly 7x less solar energy than the same panel in Khartoum, Sudan, one of the sunniest place on Earth.

It affects massively the structure of electricity markets
Another notable issue with renewable energy is its impact on power markets. Power markets do not operate in real-time since a disruption of power production could crash the power grid, the famous blackouts. Rather, power producers engage in auctions where they bid their capacity of production at a certain price. This price depends primarily on their marginal cost of producing electricity. For a coal-fired power station, the cost of producing electricity depends primarily on the cost of the fuel: coal. For a solar power producer, the cost of the fuel is free.

Once the power market system operator receives all the bids from producers and the demands of energy from consumers, it will create a market price for the upcoming period. Any power producers having offered their capacity at a too high price will have its capacity idled for the next phase. Since renewable energy producers have a zero marginal cost of production, they are preventing these fossil fuels producers from offering large stable outputs of power as their bids are lower.

The consequence is that these fossil fuel power plants, designed to run continuously, are now operating as low as 20% of the time. Coal power plants are  slow to start – to compensate, power system operators will rely on very polluting oil-fired power station.

Paradoxically, more solar power has kept the very dirty power plants alive. Moreover, solar power output is sun-dependent. This variability of production is a new challenge for power system operators: on very sunny day around lunchtime, solar power can supply 80% of the German electricity demand. However, one big cloud and this power production can quickly drop, requiring the immediate start of dirty power plants.

Conclusion
Solar power have been costly to pioneer countries like German. One last negative has been the huge subsidies absorbed for their deployment (retail power prices in Germany have quadrupled since solar subsidies were introduced). These drawbacks are being worked on and we will see next week how solar can now be an effective proposition.

Hello, I am an investment professional and passionate writer about any topics dealing with current news. My blog was born at a previous finance firm, where I was writing a weekly email to my fellow colleague to educate them on financial topics. As I was sending it on Fridays, I wanted something light-hearted and as more and more colleagues requested to be on the list, I just thought I would share it with more people via a blog. My aim is to get people who are not familiar with finance-driven news to be able able to grasp the current issues through a relaxed and short story. Do not hesitate to comment or "order" some topics. I look forward to exchanging with you.